T-Mobile are gearing up to bring customers some 4G love and they have confirmed according to sources below that they these releases will be the highly popular T-Mobile Sidekick with 4G running Android 2.3.

They have also announced that they are releasing the new Samsung Galaxy S 4G (Could possibly be called the Vibrant 4G), these handsets will probably be announced at the Mobile World Congress (MWC 2011) in Barcelona next month.

The sidekick too America by storm and many customers would look forward to a new release so it stands to reason that T-Mobile will be releasing a new one especially with 4G seeing as this will give you better performance and speeds, the Sidekick is one of the best messaging and social networking devices on the market according to its users.

The last Sidekick was the Sidekick LX and as Laptop Mag say “It disappeared from T-Mobile’s site last summer”, so we here at Phones Review are hoping this version works out fine. 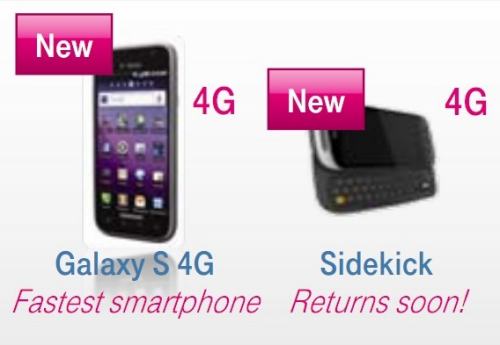 If you visit T-Mobile they still have a Sidekick dedicated page for all fans of this device, surely if they still have this page up and running it is sure there will be a new release.

We have already mentioned before about the new Samsung Galaxy S 4G aka Samsung Vibrant 4G but we were not too sure if it was true or false about releasing, but according to Engadget it has been confirmed that it is going to be announced soon, below you have an image of the Vibrant 4G of what it will possibly look like thanks to Engadget via PC Mag.