One would have thought that Apple would have come up with a way of halting hackers from jailbreaking their gear by now, and would at least expect the latest iOS tablet to have been more difficult than previous Apple gear to jailbreak but apparently this isn’t the case.

The word doing the rounds is that the Apple iPad 2 albeit only just released has now been jailbroken according to an article over on The Inquirer, and apparently iPhone hacker Comtex has demonstrated Cydia on the Apple iPad 2 with a video which can be viewed by visiting Redmond Pie.

The news of the Apple iPad 2 falling prey to a jailbreak apparently came via a tweet by @Comtex, which said…” would’ve had it yesterday if I didn’t have to spend 1.5 days looking for a replacement exploit (which came from a most unexpected place…)”

@chpwn tweeted the above image with…” by @comex: http://t.co/osP6lz” the link of course sending you off to the image on Yfrog.

Just where that unexpected place was Comtex hasn’t said, but the guys of the iPhone Dev Team congratulated Comtex by tweeting…” Congrats to @comex for jailbreaking yet another brand new device (iPad2) while 2500 miles away from it!”

Thus it would appear that not only is Apple failing in the jailbreak cat and mouse games against hackers, hackers are becoming a whole lot quicker at breaking Apple’s famed iOS although the jailbreak has not yet been released. 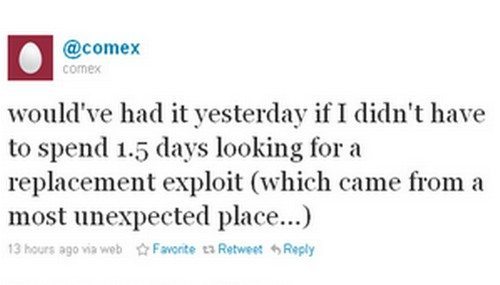