There seems to be a great deal of emphasis being placed on the latest rumoured release date for the HTC Thunderbolt, with an email reportedly giving the much sought after date as the 17th of March, St. Patrick’s Day of course.

According to an email which fell into the hands of the Android Central guys the email showed an equipment update schedule along with updated device launch info that shows the HTC Thunderbolt scheduled for launch on the 17th.

However if you look closer at the email and as the guys have stated that date is “subject to change,” as shown in the image below. So although it appears the Android 2.2 Froyo touting smartphone could release on St. Patrick’s Day it could also not.

Then again, as my colleague Lawrence reported earlier, the word is Best Buy is also touting the HTC thunderbolt release date as the 17th, but on the flip side Best Buy have also touted earlier release dates for the Android device.

So the big question remains, will the HTC Thunderbolt actually come out to play on St Patrick’s Day? The answer to which is only Verizon and HTC know, and at the moment they aren’t telling. Still there is still a little time for the Big Red to make that official announcement, unless of course that 17th release date changes. 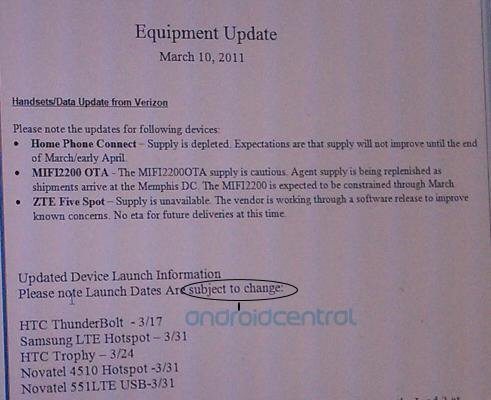