For those that are waiting for the release of the Motorola Xoom tablet in its WiFi version to hit the streets a little info has popped up on the net revealing the possible release date and asking price for the Android 3.0 Honeycomb tablet.

According to an article over on Ubergizmo the guys over at Droid-life have come across a flayer for Staples touting the device, which places the WiFi Motorola Xoom, release date as the 27th of this month.

Price wise though, the WiFi version of the Motorola Xoom may be a tad pricier that first rumoured as according to the flyer the asking price at Staples anyway is $599.98, which is somewhat more expensive that previously the touted price of $539 a while back. 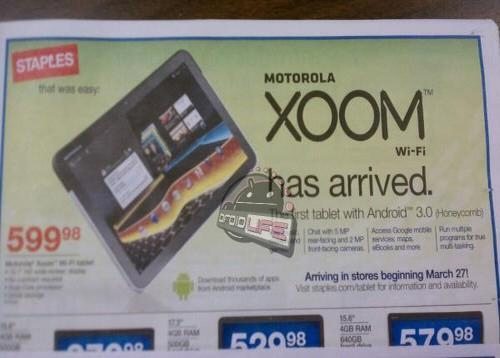