Now that the new Apple iPad 2 is out and about why not slap your iOS tablet into the dashboard of your car to replace your car audio system whilst adding a little vehicle navigation system as seen in the video we have for your viewing pleasure below.

The video footage comes our way courtesy of TiPb and by way of TUAW and the SoundManCarAudio YouTube page and delivers just over eight minutes of showing how to install the Apple iPad 2 into the dash of a Ford F150.

In the footage the guys strip out the central console and reconstruct it to house the Apple iPad 2 quite nicely. Of course if you don’t have the knowledge these guys have then it isn’t advisable you go chopping at your own car dashboard to fit your iOS tablet yourself.

Having said that it just goes to show with a little knowledge and determination you can do just about anything you want with the Apple iPad 2, so with that said hit up the video, punch that play button and check out the modification in action…enjoy. 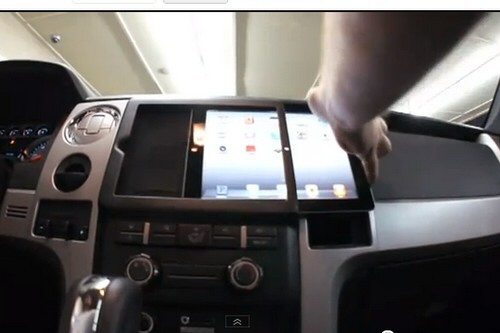