Android 2.3 Gingerbread Might Hit LG Optimus One Come May

With many Android smartphones now languishing on Android 2.2 Froyo, albeit many not yet seeing the upgrade, some are looking forward to being upgraded to Android 2.3 Gingerbread, and one such smartphone is the LG Optimus One.

LG have already stated the LG Optimus One would see the Android Gingerbread update but thus far haven’t let it be known when.

However according to an article over on Unwired View, and by way of Androidos, LG India have said on Facebook that the Optimus One should see the Android 2.3 Gingerbread update before May is out.

However, don’t let your hopes be set in stone as apparently that upgrade date to the LG Optimus One comes with the usual “subject to change” line attached

According to the article over on Androidos, LG says that the update will be available via the Android Market, something that as far as I’m aware isn’t possible; however the guys suggest that Android 2.3 Gingerbread may come via LG’s own update tool.

So there it is if it all holds true, LG Optimus One users can look forward to the end of May for grabbing a slice of Gingerbread for their device…now I wonder when Samsung will update my Samsung Galaxy S to Gingerbread? 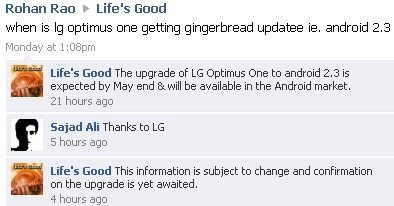