Now that the Android 2.2 Froyo HTC Thunderbolt release date fiasco is over as Verizon and HTC have gone official as to when you can nab the Thunderbolt, it might be time to think about what accessories may be becoming available for the smartphone.

Well a couple have now turned up courtesy of the guys over at Phandroid, apparently there were send some images showing HTC Thunderbolt accessories along with the prices including a multimedia dock and extended battery.

So what will these Tbolt accessories set you back? Well the extended battery is 2750mAh and will apparently command a price tag of roughly 50 bucks, and apparently there’s also a special wireless charging battery door via inductive tech that will set you back $39.99.

Lastly they found an HTC Thunderbolt multimedia charging dock that houses the Android device in landscape mode whilst filling it with juice, but the guys aren’t too sure what ports the dock will carry so could be a 3.5mm jack or mini HDMI, price wise the multimedia dock will hit your wallet for some 60 bucks give or take.

So there you have it, three new accessories becoming available for HTC Thunderbolt users at some point in the not too distant future, so will you be snapping up one of these to accompany your shiny new handset? 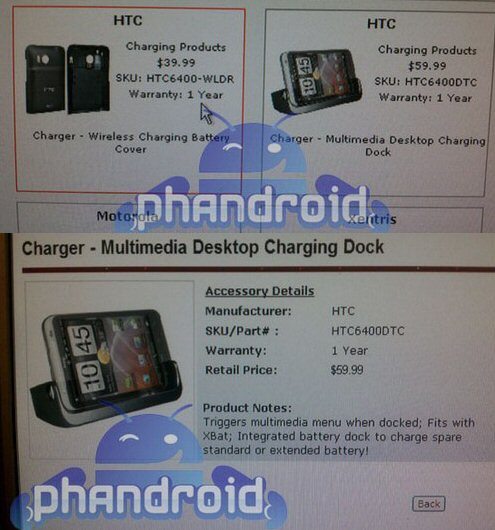