Well now, for those that are of a mind to snap up the new HTC EVO 3D smartphone once it comes out to play it would appear that if you wish to have the Android 2.3 Gingerbread handset as an unlocked version you can pre-order the device already.

According to an article over on Pocket Now, etailer MobileCity Online have placed the unlocked HTC EVO 3D up for pre-order carrying a price tag of some $699.99 without contract or activation.

Apparently when you pre-order the HTC EVO 3D from the etailer you’ll get free shipping when the device becomes available although the device will not carry any warranty in the US.

So are any of the Android faithful tempted to pre-order the HTC EVO 3D unlocked for 700 bucks, or would you rather wait for a carrier version to go up for pre-order? 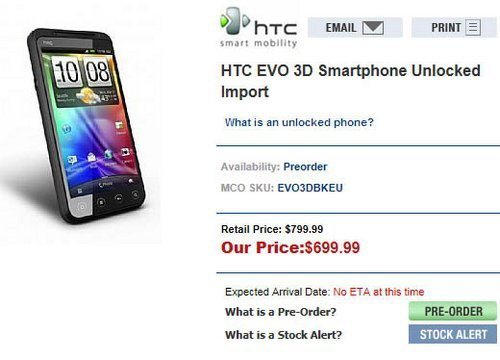