So how about finding out just what Verizon Wireless has in store for the Android faithful? Would you like to know when Verizon will release certain Android smartphones to the public? Well if the info we have here holds true you’re going to find out.

According to an article over on Phone Dog the guys over at Phonedroid have been tipped off about Verizon’s spring release roadmap giving all the juicy low down of when the Big Red expects to release several Android devices to the public.

So here’s what’s on offer according to the outed roadmap…the Samsung Droid Charge will release on the 7th April along with the Casio Commando, on the 14th April Verizon will release the first PlayStation phone, the Sony Ericsson Xperia Play, followed by the Windows Phone 7 handset the HTC Trophy on the 15th.

On the 28th of April we should see the HTC Droid Incredible 2, while jumping into May on the 5th is the LG Revolution. Other devices scheduled for release in May include the Motorola Droid Bionic, Motorola Droid X2 and Samsung Galaxy S 2 although no exact dates for those have been revealed.

Looks like a sweet couple of months ahead for Android on Verizon Wireless, as long as of course the devices don’t see any delays, and of course all are subject to change…are you excited? 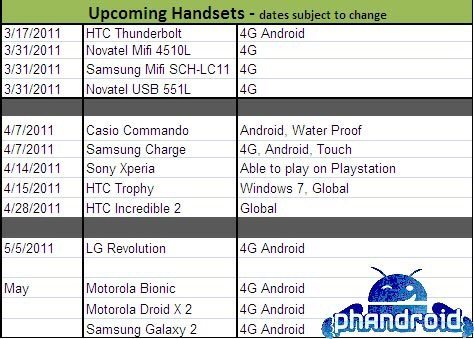