If you are an Android user and download legal apps to your smartphone then you probably wont come across a new Android Trojan that’s recently been discovered, but if you are in the habit of user prated app then you could well be a target of the Android Trojan known as Android.Walkinwat.

According to an article over on PC World, the guys over at Symantec have found the latest threat in the form of Android.Walkinwat differs from other Trojans as it targets those who download pirate versions of apps rather than legitimate ones.

“Hey, just downloaded a pirated App off Internet, Walk and Text for Android. Im stupid and cheap, it costed only 1 buck. Don’t steal it like I did!”

Apparently the Trojan uses an app that legitimate Android apps use for licence management and licence verification library to prevent piracy called “LicenceCheck.”

However, if you have been targeted by the Android.Walkinwat Trojan, removal is fairly easy as all you do is go to settings, application management, select the app and uninstall.

So, any of our Android toting readers been hit by Android.Walkinwat? 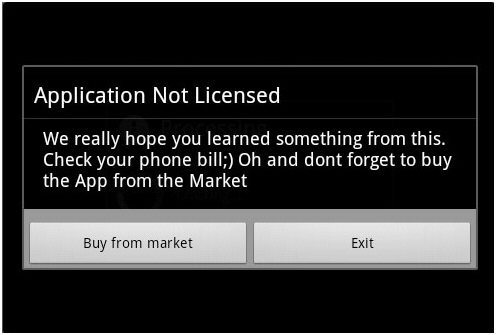