As most are aware the new 4G enabled HTC Thunderbolt on Verizon is a bit of a power hog when LTE is enabled, resulting in quick battery drainage, so the best way around this is to switch off LTE when not using it.

There is a way of turning off the HTC Thunderbolt LTE via a hidden menu, which we reported on (here) However according to an article over on Phone Arena and by way of Android and Me, there is now an easier way to turn off LTE via a new app.

The new app is called LTE OnOFF and has been designed and released by TeamAndIRC specifically for the Android 2.2 Froyo HTC Thunderbolt, and apparently some of the comments about the app herald its ability to increase the handset’s battery life.

Thus until such times as Verizon get round to delivering a software fix for the battery drainage problems, HTC Thunderbolt users may like to check out the Android app, which is a free download available from the Android Market.

Of course if you do download the new LTE OnOFF app for the HTC Thunderbolt, feel free to let us know how well the app works or not by posting to our comments area below. 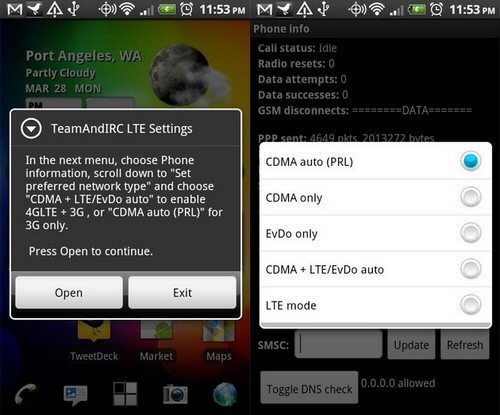