Now at the MWC in 2010 the Sony Ericsson Xperia X10 Mini Pro proved to be quite a bit of a hit, so much so, that it would appear that the makers are already considering a successor to the phone.

A few spy shots have come out of China, which appear to show what the new phone will look like (see photos below). According to the photographs, it seems that the new updated Sony Ericsson phone will come with much of the same design features as the Xperia X10 Mini Pro, such as slideout QWERTY keyboard and a small touchscreen.

However, according to the Joe Minihane of T3 (the gadget website) rather than this new phone coming with Google’s OS, it is set to come with Android Gingerbread, which is great news for all those lovers of Android enabled devices, who have previously voiced their displeasure at Sony Ericsson’s slowness to upgrade some of their devices. See our previous article by James here.

Unfortunately, at present we have no further specs for you. However, we will keep you up to date on any latest developments for this next generation X10 Mini Pro — watch this space… 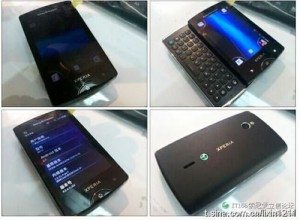