Ever wondered who has the better 4G network coverage out of Verizon’s HTC Thunderbolt and Sprint’s HTC EVO 4G? Well wonder no more.

By way of the guys at Droid Life, we are able to bring you a research study conducted by BTIG (who are a research firm), who took up the challenge to find out, which of the two network carriers had the best 4G network. I think we all had a good idea that this would be a one horse race, as Verzion’s 4G LTE network is the nearest of any of the carriers networks to resemble true 4G and this was confirmed by the 1,000 tests conducted in New York City.

Network access was provided to two devices: an Apple iPad 2 and a Toshiba laptop via the mobile hotspot app on the two HTC phones. See test results below: 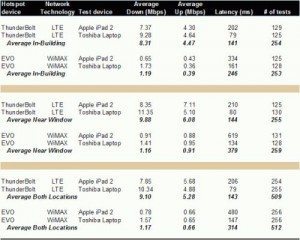 From the results in the table above there is clearly one winner. However, these results are not good news for Sprint, as BTIG tests show that the overall coverage of Verizon’s brand new network, is undoubtedly better than the almost 3-year old network used by Sprint.

One more thing that BTIG added was that the battery life was slightly better for the Thunderbolt — possibly the final nail in the coffin for Sprint. Hopefully, they will take these test results on board and improve their network coverage for the future, we’ll keep you informed if there are any developments.

It would also appear that the HTC Thunderbolt is also doing well in the stores as well, see Mark’s article here.