For all you BlackBerry lovers out there, we have the latest news surrounding the BlackBerry Monaco Touch.

By way of the guys at The Tech Herald, we are now able to provide you with a pre-launch photograph of the BlackBerry Monaco Touch, prior to the hype surrounding the phone’s unveiling at the BlackBerry World Conference scheduled to take place between 3 May and 5 May in Florida at the Orlando World Center Marriot (see photo below). 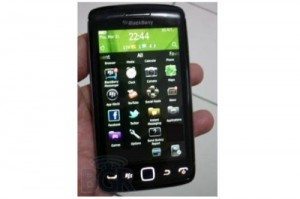 Along with the Monaco Touch unveiling are expected to be a few other new BlackBerry phones, such as Curve Touch, Bold Touch and Torch 2.

Now apparently, the BlackBerry Monaco Touch is being brought in to replace the BlackBerry Storm, which did not really take off with consumers. Further reports are that network giant Verizon Wireless will be the carrier of the Monaco Touch in the USA. Please note that it is reported that in other parts of the world, the phone will be known as the Monza Touch.

Further news from the guys at Boy Genius Report (BGR) are that as part of the new OS, a BlackBerry ID will be required by users to login to the system. See full article here.

I would further like to add that the phone was previously known as the Storm 3, see our previous articles on release,specs,pictures and branding and video.