So we’ve already seen the mighty HTC Thunderbolt 4G take on the likes of the iPhone 4, and the T-Mobile myTouch 4G, but how well can the HTC Thunderbolt come out when going head to head against the Samsung Galaxy S 4G?

Well you are about to find out the answer to that as Aaron Baker over at Phone Dog has now come up with a two-part video pitting the Android 2.2 Froyo Thunderbolt against the Android Froyo Samsung Galaxy S 4G in a comparison fight.

Aaron says there aren’t dramatic differences between the HTC smartphone and the Sammy handset when it comes to specs but there are a few differences between hardware, carrier, and software. The tow videos combined deliver just about 24 minutes of comparison, so you might like to set aside a little viewing time.

I won’t go over the specs for each device in this Android against Android fight, but rather just let your head on down to hit those play buttons and see if the HTC Thunderbolt or the Samsung Galaxy S 4g is proclaimed a clear winner…enjoy. 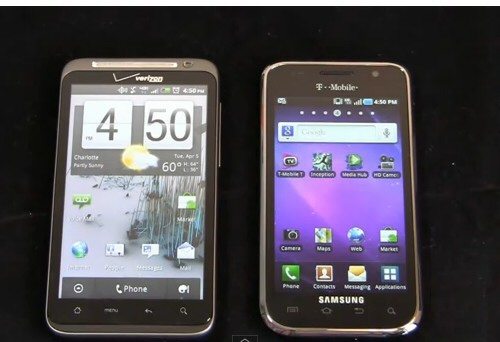