In the past it has been rumoured over in the good ole US of A, T-Mobile might one day see Apple’s iOS smartphone play nice on their network, but thus far the iPhone hasn’t come to T-Mobile USA. However that’s not to say that Apple doesn’t have plans to deliver a T-Mobile iPhone at some point.

It appears that Apple may be considering delivering the iPhone 4 to T-Mobile USA as according to an article over on the Boy Genius Report, they have pictures or what they say is a white iPhone 4 prototype with T-Mobile USA 3G bands.

Apparently they have verified that this prototype is running a test version of iOS similar to that previously seen in the white iPhone 4 video from Vietnam, and features test apps such as Apple employee directory app and Radar.

The front of this iPhone prototype is slightly different to other retail images of the white iPhone 4, particularly the proximity sensor has changed, thus the guys believe that Apple is currently testing the T-Mobile USA radio on a current model of the iPhone 4.

Could it be that Apple is indeed preparing to deliver the iPhone 4 to T-Mobile USA? Perhaps the AT&T proposed acquisition of T-Mobile has finally pushed Apple towards T-Mobile USA as an iPhone carrier.

So if T-Mobile USA does get their own iPhone 4, whether in white or black, would any of our T-Mobile USA readers pick up the iPhone 4? 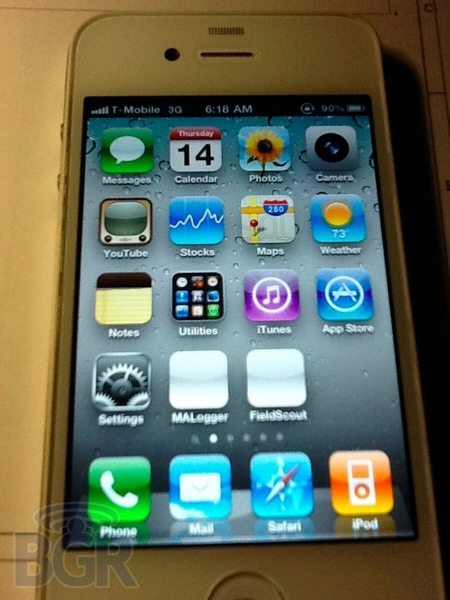