Unconfirmed reports have come in regarding an incident that took place on the afternoon of May 7, outside the Sanlitun Apple Store in Beijing, China. In which, four people queuing to purchase the white iPhone 4, were apparently assaulted by a foreign member of the Apple store’s staff.

According to one of the accounts coming to us by way of 9to5Mac, there is an indication that some people tried to push to the front of the queue that had built up outside the store to purchase the white iPhone 4 and chaos ensued, with the store security trying to keep order. However, apparently a foreign (i.e. not of Chinese origin) Apple worker came out with a metal club and assaulted two young men and two middle-aged women.

The account goes on to indicate that the worker who was wearing an Apple uniform and called ‘John’ returned to the store after the attack on the people outside, which resulted in people from the crowd wanting to enter the store to find him. However, they were denied entry to the store by the security, which ultimately resulted in the glass door of the Apple store being broken. 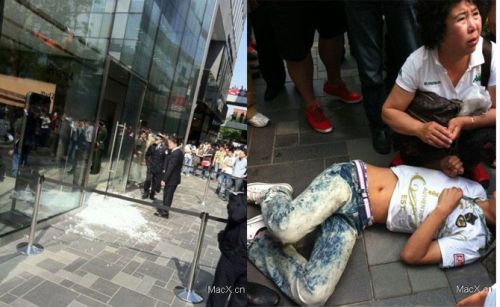 Please not that this account of the event seems to be mirrored by the accounts of others who claim to have been there and witnessed the whole event unfold. Please not that as of yet were are unable to get official confirmation of what happened from Apple, and as of yet we only have these unconfirmed reports to go on.

To read further accounts and to see more pictures of the incident visit the 9to5Mac site. If the accounts of the event are proven to be true, then it would appear to be a case of an Apple worker taking the law into their own hands and it will be interesting to see how Apple address the situation. Were you there at the time of the incident? If so, please give us your account of what happened.

One thought on “Apple Store in Beijing, China: What happened?”