Is the iPhone 5 coming soon or isn’t it that’s the big question and with rumours hitting the net waves almost daily trying to figure out when we are likely to see the iPhone 5 or iPhone 4S which it is currently being referred to gets quite confusing. The latest piece of speculation on the iPhone 5 is that Apple is hiring actors for an iPhone 5 commercial already.

According to an article over on Redmond Pie, by way of Macrumors, what appears to be a casting call for an “iPhone 5 advert” has found its way onto Craigslist albeit being rapidly removed a couple of hours later.

However, the casting call listing actually make mention of the iPhone 5, and only asks for five people both male and female of differing ages and ethnicities, and that is all other than apparently the actors would be paid in British pounds.

The current speculation on the launch of the iPhone 5 has it that the iOS smartphone is months away with some believing the device wont see release until next year, but Apple is known for shooting commercials far in advance of a release, so this could be real but then again could easily be a hoax. 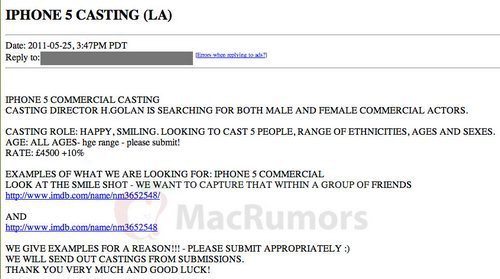