Although the Motorola Atrix 4G has seen its fair share of issues although the Android smartphone did receive an update that delivered many improvements as reported (here), and now AT&T has sweetened the pie of the Atrix 4G by offering the handset for a very reasonable $99.99.

According to an article over on Engadget, potential customers can now snap up the Tegra 2 dual-core Motorola Atrix 4G from AT&T for a penny under 100 bucks as long as their sign their life away for a couple of years to AT&T of course.

That 2-year contract also requires a minimum data service beginning at $15 per month, and a new activation. Of course if you prefer not to pen your name to an AT&T contract you can pick up the Android 2.2 Froyo handset for $449.99.

So if you have been considering purchasing the Motorola Atrix 4G but have been holding off, perhaps now is the time to hit AT&T and grab the smartphone. 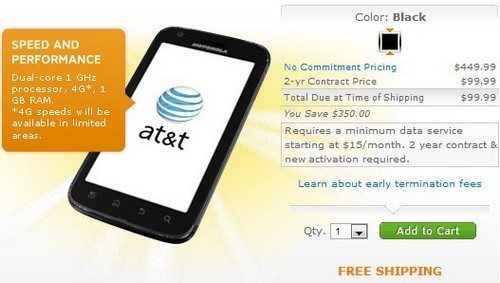