For quite a while now some owners of the HTC Thunderbolt have been experiencing random rebooting problems with the 4G enabled Verizon smartphone, but hopefully Verizon will have a fix for that problem in the not too distant future and will release an update to the Android device.

According to the guys over at Phone Arena, the guys over at Android Central have managed to get hold of a Verizon internal document, and although apparently the carrier has been unable to come up with a short term solution, a fix is on the way to those suffering Thunderbolt owners.

Apparently if owners are experiencing severe issues with their Android handset then if they visit Verizon a rep will swap the handset for a CLNR, “Certified Like New Replacement,” however if the issue isn’t too bad then the owner can hang on for the update that will fix the problem.

The update to fix the issue is apparently scheduled for the second half of June, so not really too long to wait, of course if you simply don’t want to wait you can always take advantage of that CLNR replacement offer.

So how are you getting along with your HTC Thunderbolt, are you going to wait for the update or will you be hitting Verizon for that replacement? 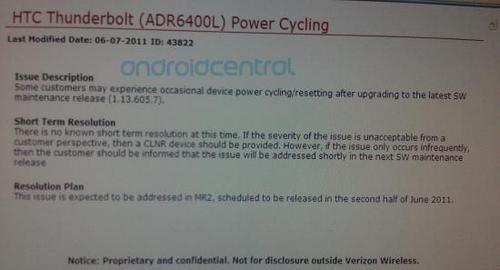