It would appear that iOS 5, iCloud and Mac OS X Lion wasn’t the only thing Apple has been working on, as the word is Apple wants to use the 150 acres of land they purchased from HP to build a new Apple campus, and Steve Jobs put that proposal to the Cupertino City Council yesterday, and we have a video of Mr. Jobs making that very proposal for your viewing pleasure below.

The video of the iPhone guru making his proposal comes our way courtesy of the guys over at 9to5 Mac and by way of the Cupertino City Channel on YouTube and delivers just over twenty-one minutes of Job spelling out Apple’s plans for the campus.

Apparently Steve compared the plans for the new campus to a spaceship and plans on having 12,000 people in a single building, and that the building could be used for such things as future WWDC events and would also house a cafeteria for 3,000 people at a time along with a large auditorium.

According to Mr Jobs…“There is not a straight piece of glass in this building, it’s all curved. We used our experience making retail buildings all over the world now, and we know how to make the biggest pieces of glass in the world for architectural use. And, we want to make the glass specifically for this building here. We can make it curve all the way around the building… It’s pretty cool.”

Apparently the plan is to begin construction of the new campus next year and move in by 2015, so head on down and mash that play button to check out Steve Jobs making his proposal, and feel free to let us know your views…enjoy. 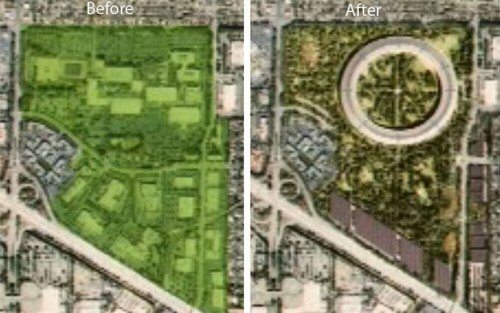