The latest word is that Walmart have jumped the gun a bit and are apparently already offering the HTC Sensation 4G smartphone for sale, and not only is Walmart selling the Android 2.3 Gingerbread device, they are selling it at a low price.

According to the guys over at Slash Gear, the guys at Android Community have got hold of some images apparently sent in from readers in Texas, who say they have just purchased the Android smartphone for $148.88.

Apparently it isn’t clear if Walmart is offering the HTC Sensation 4G off or on contract, but it would appear that if you want to get your hands on the smartphone right now you could always pay a trip to your local Walmart and see if they will sell you one.

As for the reported HTC Sensation 4G “death grip” problem, apparently the word is HTC has apparently dismissed the issue and claiming it is false. So we’d like to know if anyone manages to get hold of the HTC Sensation from Walmart and if they find that the device does indeed suffer the iPhone style death grip issue or not. 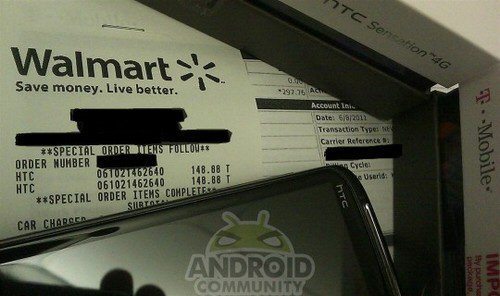