There was a bit of a buzz at E3 concerning OnLive cloud gaming coming to iOS and Android tablets, with OnLive announcing their OnLive Player app for both platforms for later in the year, and now we have a demo video of OnLive on the Apple iPad for your viewing pleasure below.

The OnLive cloud gaming on iPad demo comes our way courtesy of MacRumors and by way of the EuroGamerVideoGuides YouTube page and features the CEO of OnLive demonstrating cloud gaming on Apple’s tablet.

Apparently OnLive delivers console quality gaming to PC, Mac, TV and now the Apple iPad via remotely streaming a game from their servers meaning you can play games anywhere you like on any device you like according to the CEO.

Basically the game doesn’t actually run locally on the tablet but rather receive a video of the game from the cloud and OnLive has made the games “touch aware.” There’s no word on what OnLive will cost yet or if it will come to the iPhone.

So that’s about it I’ll let you head on down to mash the play button check out that Apple iPad gaming demo video, and feel free to let us know your thoughts on Onlive gaming for the iPad…enjoy. 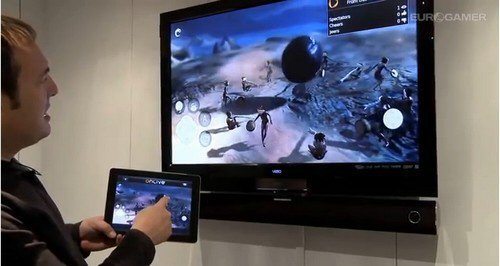