If you are simply rolling in cash, perhaps you just have so much you really aren’t quite sure what to waste it on next you could always splash a large bundle of bucks on a blinged Apple iPad, as you can now purchase the world’s most expensive iPad for a snip at just $1.2 Million.

According to the guys over at Cnet, by way of Luxurylaunches, for those that have a bank balance that could clear most small countries national dept, you can own an Apple iPad in 18 carat gold and bedecked with 300 carats of perfect sparklers.

The worlds most expensive Apple iPad as Camael Diamonds has dubbed it also adorned with black diamonds on the home button and the Apple logo on its rear, and if you really want to be different than any other iOS tablet Camael will also customise your iPad with whatever gems you like as long as you are willing to hand them a large wad of dosh.

I for one will not be one of the elite placing and inquiry about customising an Apple iPad but apparently the company has received a few inquiries, so there are some people out there with more cash than sense. 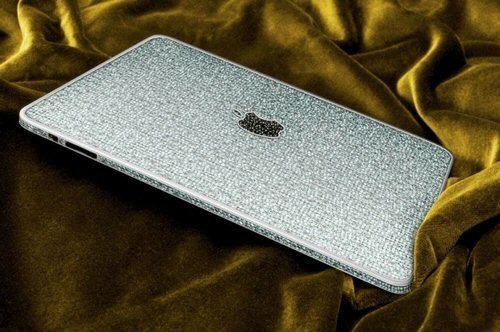