It seems that Orange has taken to the idea of naming new smartphones that play nice on the Orange network after cities, first there was of course the Orange San Francisco, and apparently Orange will soon have another Android handset on their network called the Orange Barcelona.

According to the guys over at Unwired View, the new Orange UK Barcelona smartphone will come out to play sporting Android 2.2 Froyo, has a 2.6-inch touch screen, GPS, Orange Maps, 3.2 megapxel camera, FM radio, HD voice, HSDPA and 3.5mm jack.

The 9.9mm thick Orange Barcelona is destined for the United Kingdom, but could hit other Orange markets at some point, and the Android smartphone will apparently be available as a free handset on select Orange monthly options.

Apparently the Orange Barcelona will also be available on Pay As You Go, however the carrier has not yet announced what the phone will cost, and as for the release date, well the device is currently at the “coming soon” stage.

I figure it will depend on just how much Orange want for the Barcelona on PAYG as to whether Brits will take to the smartphone, especially as there are so many other Android options out there. 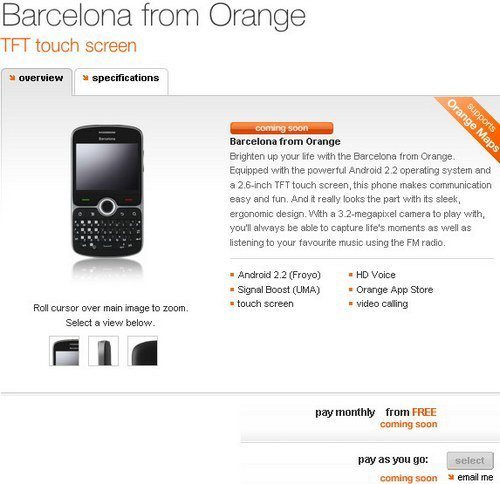