Chinese copycats often target top smartphone one of the most copied handset of course if the iOS smartphone, and apparently there is a knockoff of the iPhone 4 now available in China that is almost a perfect replica of Apple’s device and carries the rather strange name of Gooapple 3G, and we have a video of said device for your appraisal below.

The Gooapple 3G video comes our way courtesy of the guys over at Phandroid and by way of YouTube user Kuma0341 and delivers an almost twelve minute look at the iPhone 4 clone that apparently is so close to the original handset it can use all cases and screen protectors made for the iPhone 4.

Apparently the operating system has been customised to look just like iOS but is actually Android 2.2 Froyo OS though you couldn’t tell on first glance, but you do get quite a good look at it in the footage, and even runs Angry Birds.

Near the end of the video the guys say “since Microsoft has cooperated with Nokia, why can’t Google and Apple?” Good question really, would you like to see Apple and Google join forces to come up with an Android iPhone? 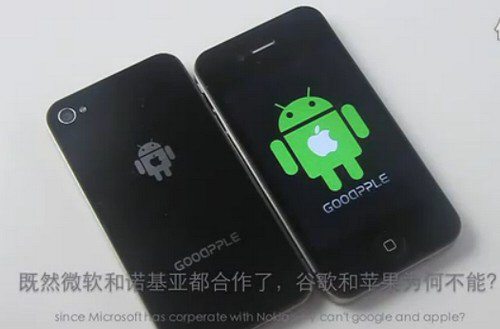