Unless you’ve been stranded on a deserted island in some remote part of this world you will know that Apple is moving to cloud based services with the unveiling of their iCloud service for the iPhone and Apple iPad, and takes a different approach to the cloud than Google.

The guys over at Computer World have done a lengthy comparison between Apple iCloud and Google Cloud, so we thought we’d pass along a few of the highlights but if you wish to check out the complete article you can hit up their website.

Google’s cloud concept is of course basically web based, which has a few advantages such as the user can access Google services from any smartphone, tablet, laptop, or computer as long as they have an internet connection and web browser, although there are of course numerous mobile apps that can interact with Google services.

Apple’s iCloud though takes a different approach, as it is app centric thus using iOS apps. Syncing calendar and contact is similar to Google, but when it comes to working with data and docs is where iCloud differentiates.

Apparently iCloud doc sync isn’t designed to use “public sources” such as the web, but rather delivers API’s to developers to embed in their applications resulting in data and docs created in apps being tied to said apps.

However both Apple’s app take and Google’s web take on the cloud push users in the same direction gaining instant access to their data no matter where they are or when they want it, and although Apple maintains its customers in a “walled garden” Google apparently doesn’t deliver when it comes to an effortless and seamless experience.

iPhone and Apple iPad users do have another advantage though, they don’t have to stick with iCloud and can access Google services and thus aren’t limited to just Apple’s iCloud services whilst Android users won’t have access to iCloud services. 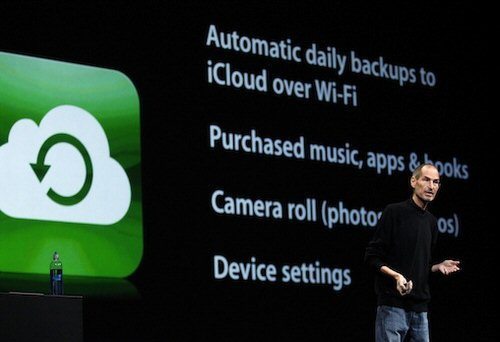