More rumour on the next Apple iOS smartphone, which is currently being called either the iPhone 4S or iPhone 5 whichever you prefer, and the latest rumour doing the rounds is that the next iPhone has now gone into the final testing stage so has to be a tad closer to hitting the streets right?

The word that the “next iPhone” has gone into the final testing stage comes our way by the guys over at 9to5 Mac and by way of @Chronicwire, and apparently the word is both carrier and Apple top execs are carrying the iOS smartphone.

On the Verizon 3G Facetime front, the word is the Big Red and Apple still haven’t struck a deal for allowing Facetime over 3G and that both Verizon and Apple are working out “kinks” over iOS 5 OTA updates support, which could mean a delay to carrier support.

Furthermore, apparently the guys have dug into iOS 5 and found references to “N93” and N94” which are internal codenames for unreleased iPhone variants, apparently the “N94” model is an A5 dual-core processor packing iPhone 4 possibly the handset a small team of iOS devs got hold of back in April while the “N93” version could well be a carrier version of the “N94.”

They also add that whilst delving into the iOS SDK it appears that the next iPhone will sport a 5MP camera the same as the iPhone 4 despite the current rumour of an 8 megapixel camera for the next iPhone, although Apple may have just forgotten to update the SK files.

So there you have it the latest speculation over the next Apple smartphone, and of course it is only speculation at this point and should be treated as such. 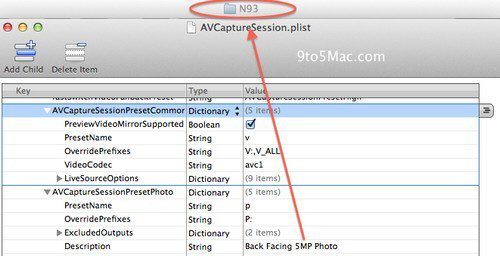