There’s a new app for the Apple iPad being developed for release that apparently delivers a new way of photographing war. The app called Condition ONE is a “new form of storytelling,” and uses a custom camera system developed by Danfung Dennis who has been documenting war for years in still photographs and motion.

Dennis say that the Condition ONE app for the Apple iPad combines “the power of the still image, the narrative of films and the emotional engagement of tactile experiences to create a new language that is so immersive, it will shake viewers out of their numbness to traditional media and provide them a powerful emotional experience. Instead of opening a window to glimpse another world, we are attempting to bring the viewer into that world as an active participant.”

We have a short video of Condition ONE in action for your viewing pleasure below courtesy of 9to5 Mac and by way of Time Magazine who profiles Condition ONE, which lasts almost two minutes, but be warned the footage does contain some strong language.

Conflict photographer Patrick Chauvel, who is currently in Lybia, tried out the custom camera system and says, “Before, when I was shooting, my camera only showed what was in front of me, the action. It was frustrating because often what happens just at your right is part of the story. Now it is like having five cameras. One more at your right, your left, up and down.”

There’s no word on an actual release date for the Condition ONE app for the iOS tablet, but apparently the launch has been set for mid 2011. 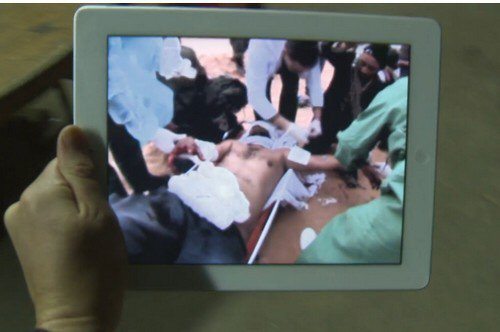