So did you know that if there is less competition in the mobile business the result would mean lower prices for the customer, and not less competition would mean higher prices? Well apparently that’s what AT&T is trying to spin people to accept with their acquisition of T-Mobile.

According to an article over on Consumer Reports, apparently AT&T is arguing that incorporating T-Mobile into AT&T would result in lower prices for mobile devices, and on their website in an area dedicated to the acquisition of T-Mobile, AT&T has a chart that runs from 2002 that shows “when [cellular] carriers combined to achieve efficiencies, U.S. wireless prices fell.”

However, the article says that AT&T has overlooks one important point and that point is possible the mobile phone market has expended over the years, and carriers have had to hastily reduce handset prices and improve on services to pull in sales.

Furthermore the FCC looks at competition levels yearly and in 2010 one of the FCC’s key findings was “Competition has played…an essential role…leading to lower prices and higher quality for American consumers.”

So it would appear that AT&T is trying to pull a blinder by attempting to get people to believe that acquiring T-Mobile would lead to better pricing and less competition, while history shows it is really the other way round and competition leads to lower prices.

So what do our readers think about all this, could AT&T merging T-Mobile into its ranks actually deliver better smartphone prices for customers or do you think AT&T is all bluster and puff and simply trying to smooth the way? 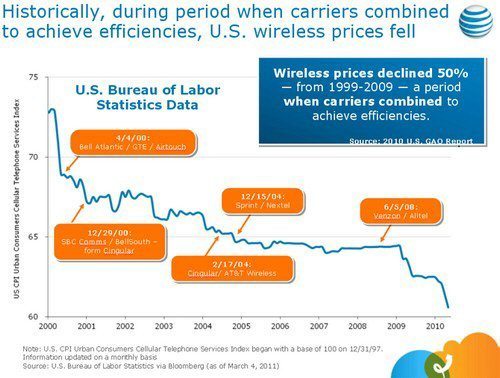