The first Meego smartphone from Nokia is of course the Nokia N9 which Nokia unveiled at Nokia connection 2011 and the device has quickly found its way into some hands for a couple of hands-on videos, and of course we have those Nokia N9 hands-on videos for your viewing pleasure below.

The Nokia N9 somehow found its way into the hands of the guys over at Engadget, who have come up with the hands-on footage for us all, and say their first experience with the Meego smartphone is that they are in the presence of “a fantastically designed device with a gorgeous AMOLED screen and some highly responsive performance.”

Build wise the guys say that the Nokia N9 feels as good as a handset built in plastic can feel but as the Nokia N9 is basically constructed into the external shell the device’s battery isn’t user replaceable and there is also a lack of microSD expansion.

The Nokia N9’s ClearBlack AMOLED display the guys say is a “sight to behold,” with curved Gorilla Glass front and great viewing angles. So rather than me go on, I’ll shutup and let you head on down to hit those play buttons and check out getting up close to the new Nokia N9…enjoy. 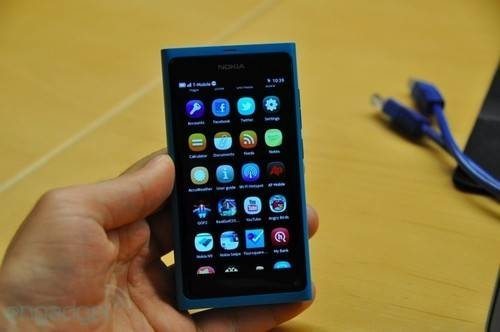