Now let’s be honest, when it comes to smartphone cameras, Nokia knows a thing or two, and thus concerning the new Meego Nokia N9 smartphone camera, Nokia believes the device has the fastest camera available on the smartphone market.

According to the guys over at Slash Gear, Jens Wilkes, product manager for Nokia told Nokia Conversations, “It’s the fastest image-capturing phone on the market,” and compared the Nokia N9 camera with rival smartphones.

Apparently the Nokia N9 camera takes just 2.6 seconds to turn on, have the viewfinder ready, focus on something and snap the picture. The Nokia N9 camera’s closest rival is the Apple iPhone 4, which takes 3 seconds and is followed by the Samsung Galaxy S2 taking a tad longer.

When it comes to Microsoft Windows Phone 7 handset, well they are kind of slow with the LG Optimus 7 taking virtually five seconds and the HTC HD7 taking a rather long 8.3 seconds to do the same.

As for editing an image, Wilkes says, “The Nokia N9 has something called non-destructive photo editing which lets you edit a photo, with a way of reversing all the edits should you change your mind. A first in mobile phones.”

So we’d like to know from our reader’s if how fast a smartphone camera performs sways your decision to pick up the device in the first place, or isn’t camera performance that relevant to why you purchase a handset? 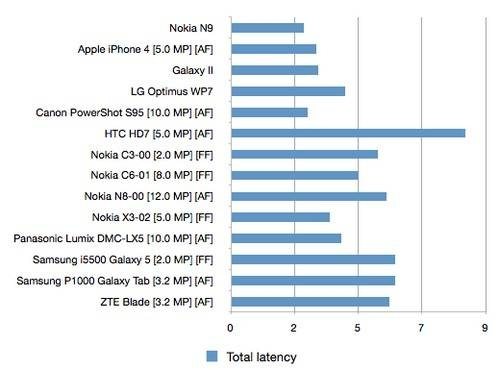