Yes a video comparison fight between the Samsung Galaxy Tab 10.1 against the Asus Eee Pad Trandsformer, which comes our way courtesy of Noah Kravitz over at Technobuffalo, and jointly delivers fourteen and a half minutes of tablet battling.

According to Noah, both the Samsung Galaxy Tab 10.1 and the Asus Eee Pad Transformer have “remarkably similar specs,” and identical features but with a couple of differences such as the Galaxy Tab 10.1 being thinner and smaller, whilst both devices have the same processor and Android OS.

But which of these two Android tablet giants will grab your attention most, can the Samsung Galaxy Tab 10.1 out shoot the Asus Eee Pad Transformer to come out tops? Well to find that out you’ll need to head on down and hit the play buttons, and see if you agree or disagree with Noah’s appraisal of the two tablets…enjoy. 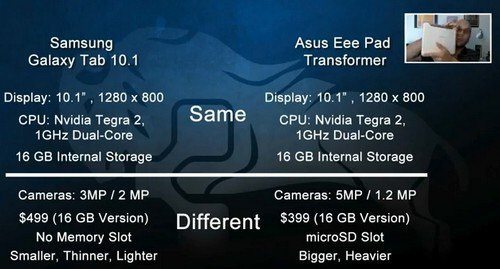