Owners of the Android 2.2 Froyo sporting T-Mobile G2x have been somewhat frustrated over their continued wait for LG to come forth with the Android 2.3 Gingerbread update for their device, and all LG can do is apparently say more info on the update is immanent.

According to an article over on Tmonews, in response to a question on Twitter from @dsbogard, asking LG to fix the phones they’ve already released rather than focusing on new phones, @theLGgirl replied…

“@dsbogard the GB update for the G2x is a huge focus. That’s a promise. Hoping to give you more info in the next few days.”

Which basically means G2x user can expect more information on the Android 2.3 Gingerbread update in the coming days, but that doesn’t mean LG will actually release the update at that time. So for now it would appear that T-mobile G2x users will continue to be frustrated for the time being. 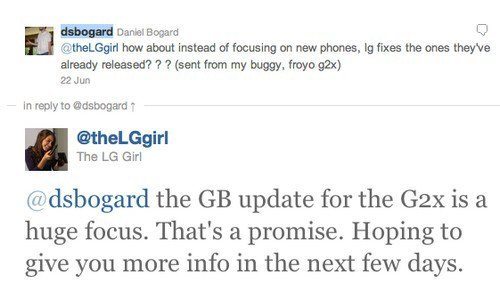