Just goes to show, you are never too old to get to grips with today’s advanced technology, I mean who would have ever thought that the head of the roman catholic church would take up tweeting from an Apple iPad? Well it appears that Pope Benedict XVI has become one of the iOS faithful.

According to the guys over at 9to5 Mac, the Rome Reports is reporting that yesterday the Pope made his first tweet from his Apple iPad, and we have a video of the occasion for your viewing pleasure below showing the Pope and his aids getting to grips with Apple’s technology.

Apparently the Pope sending his first tweet via the Apple iPad was a way of celebrating his 60th ordination anniversary along with keeping up to date with advanced technology, an of course yet another way of reaching the masses.

The video, which can be seem below lasts just on two and a half minutes where we get to see a couple of suits show the Pope how to handle the Apple iPad and the social networking tool. So head on down and mast that play button to check out the Pope becoming an Apple fan…enjoy. 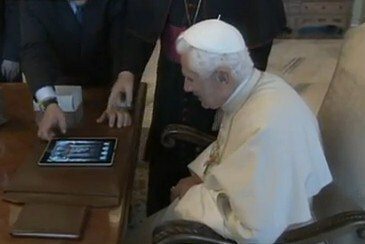