Let’s face it anything to do with Apple’s next generation iOS smartphone is going to be big news in the mobile space and hit the net all over the show, and the latest of said iPhone 5 rumours is that China will gain the iPhone 5 in September, and it appears that that may have now been confirmed by a Chinese reseller poster.

According to the guys over at iPhone In Canada, one of their readers snapped an image of said Chinese reseller poster that apparently shows that the next generation iPhone could see release on Friday the 9th of September.

Apparently the unnamed reader was on a return trip to Dalian City in China where they spotted the poster outside an authorised Apple gear reseller. Apparently the poster says “accepting pre-orders,” while another poster says, “available on September 9th.”

Word is the reader, known as Joseph, didn’t take a picture of the poster that shows the possible iPhone 5 release date is because as the reader says…” There is another poster says “available on September 9th” but it was right in front of the shop so I did not dare to take the picture. This one says ”accepting pre-orders” and it is outside an “Apple authorized” shop.”

Apparently the reader was unaware of the recent spate of rumours concerning the release of the iPhone 5 in September due to China blocking such social networking sites as Twitter and Facebook, so only revealed what he saw on his return home.

The rumours of the iPhone 5 releasing in China in September came on the back of Apple acting CEO TIM Cook visiting China Mobile in Beijing recently, where it was presumed that Cook formed a deal for the iPhone 5 with the worlds largest mobile carrier, and was apparently back up with a tweet from a China Mobile employee.

Thus it would appear if true that the iPhone 5 may see release in China at least on the 9th of September, however, one store poster doesn’t make an official announcement or confirm a release date, and personally I can’t really see Apple delivering the iPhone 5 to China Mobile before the iOS smartphone sees release in the USA can you, has Apple ever release the iPhone anywhere before the US?

It’s unfortunate that the reader didn’t actually snap a picture of that other poster showing the rumoured release date, but there you go, which basically places this firmly in the land of speculation as one guy’s say so doesn’t make it fact, and as I continue to state, only Apple knows when the iPhone 5 will materialise and they will only let on when they are good and ready to do so. 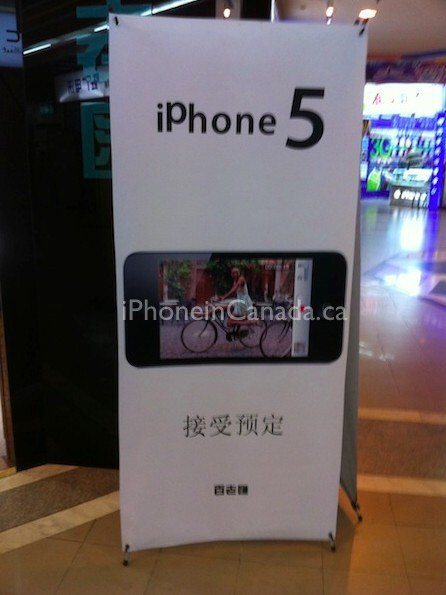