If you are one of the iOS faithful out there in need for a downloads manager for your iPhone or Apple iPad then you just might like to know that Digital Poke has now released version two of the Meteoric Download Manager to the Apple App Store, and is available for the iPhone, iPod Touch and the Apple iPad.

Apparently the Meteoric Download manager app for iOS devices is “amazingly fast” sports a “stunning” user interface, and is a feature rich application that enables the user to capture and download to their chosen device most media files, providing accelerated downloads along with a powerful file manager system.
The Meteoric Download Manager app for iOS also features Dropbox integration and Firefox sync, the ability to intercept and grab virtually all iOS playable media, robust file mamager that does more than normal operations as it unzip/unrar files, plays any supported iOS files in file preview and Airplay support for media files and restores user’s time capsuled bookmarks.

The Meteoric Download Manager is apparently the only download manager with support for Firefox sync enabling the user to sync their desktop open tabs, history and bookmarks, while the integrated Dropbox enables the user to upload files to their Dropbox via the file manager.

The iOS app also features what they call a Magic Bar, which allows the user to instantly view their bookmarks, and add bookmarks by way of a “toggle-able bookmark bar” that can be operated by pulling the web page down and then releasing it.

The app also features a built-in media player that will play MP3 files stored inside the app, and make playlists and even has background support. The user can even create a web server via downloads module and stream all their files to any device over WiFi.

And just so you can check out the Meteoric Download Manager app in action we have a few walkthrough video for your viewing pleasure below, the first checking out the video grabber in action on the iPhone, another showing file transfer, another showing the file manager, while the last shows plug-ins for the app, so don’t forget to check out the footage before heading off to grab the Meteoric Download Manager for iOS devices…enjoy. 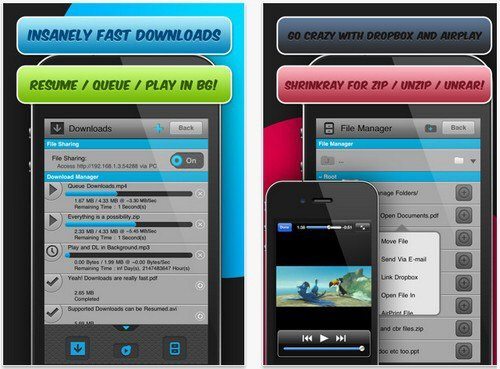