If you are one who enjoys a flutter now and then you probably have in the past placed a bet using your mobile, whether that be a smartphone or tablet, and just so you know betting via mobile is big business, the worlds largest betting community, Betfair has now announced that in excess of Â£1 billion worth of bets were placed in the last financial year via the firms mobile products.

On Wednesday the Betting Exchange released their full year results, which showed 168,000 people placed a bet last year via their mobile phone, which is apparently a year-on-year increase of 122 percent.

In the year over 900 million bets were placed on such major events as Cricket Worlds Cups, Football and the Cheltenham Festival leading to revenue from mobile devices rising to 88 percent.

Recently appointed VP of mobile engineering for Betfair, Raj Vemulapalli said, “Betfair has had an explosive year in mobile and our sights are now firmly set on reaching even greater heights in the year ahead. Developing new betting methods and experiences for the increasing amount of our customers who wish to access Betfair through their mobile phones is a key priority of the business. The surge in global smartphone sales represents a significant opportunity for us, and we’re confident that our track-record of delivering cutting-edge technology for our customers will enable us to capitalise on this trend.”

The betting company has a mobile technology centre of excellence in San Francisco and has led the way in mobile betting, delivering first-to-the-market apps for both the Apple iPhone and the Apple iPad, with apps available in 14 Apple App Stores, in 12 languages and have been downloaded to iOS devices more than 200,000 times.

The iPhone and iPad apps are also joined by the addition of HTML5 web based apps for Android smartphones, along with the new Racing on Your Mobile app, which is powered by Timeform. Along with in-house applications, Betfair also enables 3rd party developers to construct their own mobile products off the Betfair Exchange via their Application Programming Interface (API).

Furthermore to get developers to innovate in the mobile betting arena, back in March Betfair offered a new revenue sharing deal to app developers that gives five percent of revenue generated via mobile applications back to the developers.

Personally I’m not a gambler so don’t use any mobile gambling apps, but it appears that a great deal of mobile users do, so gambling by your mobile device is big business in the betting arena. Any of our readers have a flutter via their smartphone or tablet? 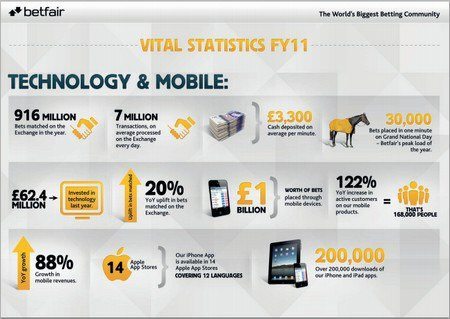