If you’ve got a new tablet, and it’s the first tablet to sport webOS, such as the HP TouchPad then you are going to ant to promote said tablet by getting someone reasonably well known to deliver their views on the device, and what better way to promote the new HP TouchPad than getting comedian Russell Brand to tout the slate?

So that’s what we have for your viewing consideration below, a video of short takes that have Russell Brand giving his views on the features of the HP TouchPad as only Russell Brand can. The video footage comes our way courtesy of Business Insider and delivers just over four minutes of Brand’s amusing comical bantering.

In the HP TouchPad promo video, Mr. Brand covers such things as true multitasking on the webOS slate, Just Type where Russell admits he had an idea once back in 1989, Full Web with both HTML5 and Flash, Synergy, which Russell describes as “all of reality condensed into a little biscuit.” Smart Notifications, Entertainment Everywhere that is according to Brand, the full package, Touch to Share, which Brand says is like catching a good virus, the HP Touchstone, and even manages to give his own book a plug.

The webOS HP TouchPad tablet is 13.7mm thick and weighs in at 730 grams, with a 9.7-inch display, 1.3 megapixel fixed focus camera, 1.2GHz Qualcomm Snapdragon processor, and of course webOS 3.0.

Now I’m fairly sure Russell Brand didn’t actually promote the HP TouchPad for the love of the tablet, as I am sure he got paid reasonably well for lending his name and thoughts to the HP slate, and whether Russell actually owns and uses an HP TouchPad is up for debate, but this is the norm when getting celebrities to promote a device.

The HP TouchPad has not seen great reviews from the tech world, with one analyst claiming that with the HP TouchPad “the price points on the TouchPad are aggressive enough to attract the incremental buyer from the iPad.”

Recently HP put out an offer to entice webOS device owners to pick up the HP TouchPad by offering webOS smartphone owners a 50-buck mail in rebate when purchasing the new webOS tablet in the United States and Canada. Whether that offer will attract customers remains to be seen, but if you enjoy watching Russell Brand and his way with words head on down and check out the comedian giving his all in the name of the HP TouchPad…enjoy. 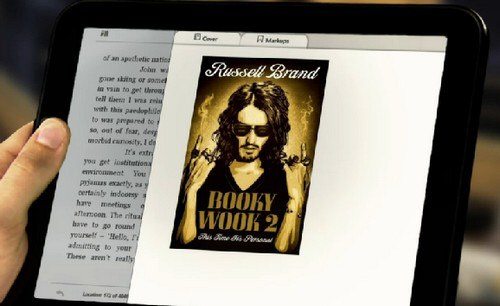