Microsoft’s Windows Phone 7 devices are still very much in their infancy, but with Nokia expected to begin pushing out Nokia branded Windows Phone smartphone later in the year, more handsets should become available, but as you know in the mobile space a smartphone is nothing without applications, and although Windows Phone is still a youngster, developers are gaining ground when it comes to available apps for the platform.

According to the guys over on the Boy Genius Report, app tracking site WindowsPhoneAppList, the Windows Phone 7 Marketplace has now grown to over 25,000 apps, which although when compared to the likes of iOS and Android is still very small it’s an improvement on the 18,000 available apps back in May.

Obviously the big boys in the smartphone and tablet apps game are Apple and Android with Android offering in excess of 200,000 apps for their users while obviously Apple commands the lead with 500,000 apps available in the iTunes App Store. However Android continues to catch up with its closest rival and will probably at some point in the future overtake Apple, although most of the iOS faithful would say otherwise.

Not too long ago a device was captured on video that was purported to be the first Windows Phone handset from Nokia, a device that carries the codename Sea Ray, which runs the new Microsoft Mango operating system, although there is no word on just when Nokia will make the Windows Phone available.

As for those 25,000 Windows Phone apps in the Marketplace, the top five paid Windows Phone applications happen to be all mobile games, with the hugely popular multi-platform game Angry Birds being the best download naturally, and is followed by Sonic the Hedgehog 4 Episode 1, then comes Plants vs. Zombies, followed by Doodle Jump and in fifth position sits Pac Man Championship Edition.

When it comes to overall app figures, there are 13,004 free apps or 51 percent of the Marketplace, 7,677 paid apps which equates to 30 percent, and 4,778 paid apps with trial which is 19 percent. As for category, games commands the biggest share with 17 percent, books and reference comes next with 13 percent, entertainment is third with 11 percent, tools has 10 percent, news and weather commands 10 percent, lifestyle has 9 percent, travel has 7 percent and productivity has 5 percent with the rest 4 percent and below.

Still a long way to go for the Windows Phone Marketplace to come anywhere near rivalling other app stores, if they can ever get anywhere near that is, and apparently Microsoft has yet to go official in announcing reaching the 25k app milestone. 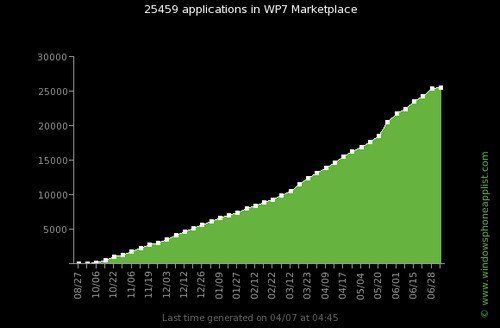