There’s a new mobile phone 2-in-1 fuel cell charger and battery pack heading for the mobile space in Q4 in Europe and Q1 2012 in the United States and is called the PowerTrekk from myFC, which uses a safe and eco-friendly technology with the only by-product from the fuel cell being a small amount of water vapour.

Technology investment bank GP Bullhound has now completed the second tranches of the expansion funding round for myFC based in Stockholm. MyFC is a fuel cell tech firm that develops solutions for powering portable devices such as mobile phones, GPS devices and cameras.

Investors in this round of funding are the Sixth Swedish National Pension Fund and KTH Chalmers Capital, and having secured several patents around propriety shaped flexible fuel cell systems with a record of high power density, myFC will launch their first product, the PowerTrekk in Q4 2011.

The 2-in-1 PowerTrekk solution is both a fuel cell and battery pack and the portable battery pack can be operating independently as a storage buffer for the fuel cell or a ready source of power. The fuel cell can instantly charge a depleted battery without the necessity of a wall charge.

The PowerTrekk is easy to use as the user just inserts the fuel pack and adds water, and to charge portable devices such as mobile phones the use uses a USB port to connect the device to the PowerTrekk.

CEO Bjorn Westerholm says, “We are delighted to have chosen GP Bullhound as our transaction advisor. Their energy, international contacts and deep industry understanding has been of great value to us. We look forward to continuing to work with GP Bullhound in future transactions.”

Westerholm went on to say, “We see huge interest in our product both from media, the outdoor and ITC industries and consumers. As a result of this, we currently cannot even meet the market demand for the product. We understood that we were addressing an immense market opportunity but we never fully understood the extreme market demand for a fuel cell charger such as PowerTrekk. Each year, around 2 billion mobile phone chargers are sold and the travel charger segment, which is the fastest growing sub-segment, is valued at more than â‚¬11 billion.”

The PowerTrekk should be available in selected stores in Europe sometime late fall in 2011 and commands a recommended price of â‚¬199, ad we have a quick one minute promotional video of the myFC PowerTrekk for your viewing consideration below. 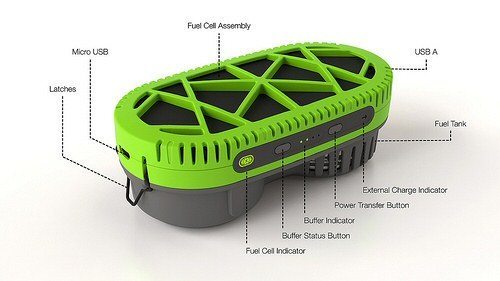