We have a little video battle for your viewing pleasure below that sets Nokia’s latest operating system, Symbian Anna up against Android’s latest smartphone operating system, Android 2.3 Gingerbread with a comparison fight between Samsung’s flagship Samsung Galaxy S II and the latest in the Nokia X range the Nokia X7.

The Nokia X7 versus the Samsung Galaxy S II face off two-part video confrontation comes our way courtesy of the guys over at My Nokia Blog and was performed by the guys over at Smartphone Envy and jointly deliver just over twenty-nine minutes of smartphone comparison footage.

Obviously one has to take into account that the Samsung Galaxy S II starts off having a massive lead over the Nokia X7 when it comes to internals as internally the Nokia X7 is basically on par with the Nokia C6-01, so it’s fairly obvious which smartphone will win this fight.

So basically the Samsung Galaxy S II is on the winning side right out of the gate so I’m not really too sure why they bothered comparing the top-notch Sammy handset against the Nokia X7 anyway, as it’s a bit of a Samsung and Goliath fight here with Goliath being Samsung and coming out the winner (pun intended), also surely the Samsung Galaxy S II has to be considered if not the best then one of the best Android smartphone out there.

So all you really need do now is head on down and mash those play buttons to check out the Nokia X7 attempting to face up to the might of the Samsung Galaxy S II, no contest really, still enjoy the footage anyway. 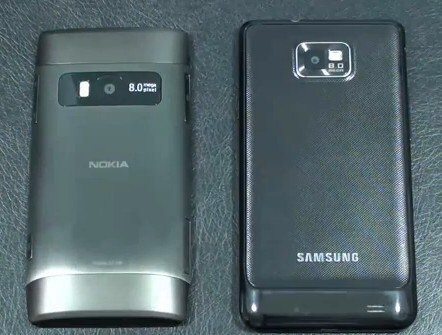