For those that have been waiting to grab the red version of the Android device Vodafone UK now offers the Sony Ericsson Xperia Neo in red as a free smartphone on contract b starting off at 26 quid per month, unfortunately I can’t let you know any of the other contract details due to a technical problem with the Vodafone UK site that won’t allow me to access the info.

If you pick up the Sony Ericsson Xperia Neo red you will get in the box, the handset of course, battery, phone charger, USB cable, a hands free headset, and an 8GH memory card, which naturally can be expanded up to 32GB via the microSD slot on the device.

And that’s about your lot, as the main deal with this article is that you can now go grab the Sony Ericsson Xperia Neo in its nice shiny red coat from Vodafone if you are inclined to do so. So any of our readers been waiting to pick up the Xperia Neo in red or doesn’t the colour of a smartphone sway you one way or the other? 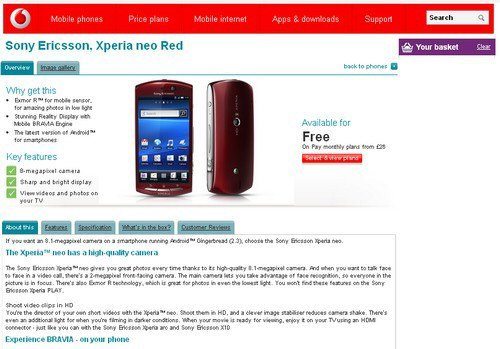