Xperia Pro Not Shipping in UK Until Late Sept

For those over here in the United Kingdom that may have had their eyes on picking up the Sony Ericsson Xperia Pro smartphone soon, unfortunately you are still in for somewhat of a wait before you can get your mitts on the handset as it’s not shipping in the UK soon.

According to the guys over at Engadget, the official Sony Ericsson UK store is now listing the Sony Ericsson Xperia Pro availability as “late September,” however the SIM free pricing for the Android device remains the same at Â£349.99, which is roughly $558.

Unfortunately though there is no word on just why the Sony Ericsson Xperia Pro release in the United Kingdom has been delayed until that late September timeframe.

Or of course if you imply must have the Android Gingerbread toting Xperia Pro because of that QWERTY keyboard then it looks like you’ll just have to hang on in there and hope that Sony Ericsson doesn’t delay the handsets release further when late September rolls around.

I know it can be somewhat disappointing when you expect to see the smartphone you want become available at a certain time, but as is the way with things in the mobile space, sometimes devices get delayed even if the maker doesn’t say why, nothing you can do about it other than wait or pick an alternative device, so will you be moving to another handset because of the delay? 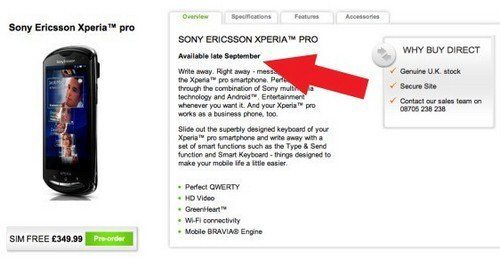