Well I guess technology is moving along at a great pace and it wont be long before we see futuristic robots doing stuff for the human race on the home front, and it looks like the Android platform is taking a few steps to deliver robotics to the home, as Sanyo Homes in Japan has just released an Android based robot, not really phone news but as it’s Android I though I’d pass it along.

According to the guys over at Tech Crunch, the cute looking Android powered “communications robot” is called the MIRAI SANZO and wil become available in Japan as of tomorrow but no word on whether the cute spherical robot will be making its debut anywhere else outside Japan.

The MIRAI SANZO measure 22 cm in diameter and is apparently part of an integrated smart home, which Sanyo markets in Japan with the tag line “families of the future.” However there’s no information as to which Android version the MIRAI SANZO robot runs.

So, what does this cute pastel green ball do? Well the Android sphere sports a touch screen with touch sensors so you can activate and deactivate the device, has WiFi, and voice recognition and can do stuff such as when the owner says “Switch on air-conditioning in the living room” the little Android ball will make sure the command is carried out instantly.

Apparently the device can also turn on/off floor heating, make sure your bath tub is filled with hot water when requiring a bath, and if your fire alarm is triggered the robot can shoot off an email to your smartphone.

The cute Android powered globe can even glow in seven different colours that express the device’s current emotion, presumable red means the robot is annoyed at something, it’s not too clear on the emotions front.

No word on what the MIRAI SANZO Android communications robot will set you back yet though, but I’m pretty sure it will come at a suitable price for such advanced technology.

Now all we need to do is keep an eye on that cute Android bubble to make sure it doesn’t get grand designs on become a terminator type that plots to take over the world from the home…only joking. 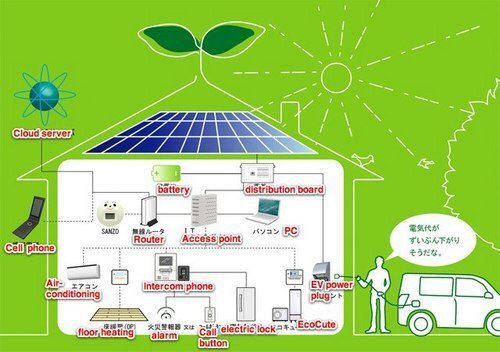