Well now if you are somewhat on the visually impaired side and the biggest of smartphones out there simple don’t do it for your, you can very soon, if you are one of the iOS faithful out there, turn your Apple iPad into the biggest mobile phone ever, a 10-inch phone.

According to the guys over at Engadget, there’s a new application coming from Line2 later this month the Line2 VoIP app that delivers phone functionality to your larger display Apple iPad due to a dedicated iPad version.

So here’s the gist, the Line2 app will become available on the 28th of this month and will enable the user to make a call via built in speaker and mic or wired headset, send text via a single HD interface, and listen to voicemail.

The Line2 app comes with a week’s trial, after which the cost is $100 annually or $10 per month, subscribers will also gain unlimited texting and calling nationwide and the service works over both WiFi and 3G.

Furthermore according to the article the Line2 guys have said that the application will support Bluetooth calling with the Apple iPad 2 and “any device that features HFP1.5,” although apparently Apple restricts functionality so users will only be able to use the headset for audio.

And just so you can find out what the Line2 app is all about, we have a first look video of the app working on an iOS tablet for your viewing consideration below, so don’t forget to mash that play button and check it out.

For those interested parties you can sign up to be notified when the Line2 app for iPad becomes available by entering your email address on the Line2 website.

Personally I think although a smartphone is the ideal size for carrying around and making calls, and the Apple iPad is a bit on the large size for carrying around all the time, this new app could be of great help for those that suffer with poor eyesight, as the iPad’s display should make it easier for them to hit the right keys when texting and right numbers when dialling a call. Sounds a bit like a Skype compeitor for the iPad to me too. 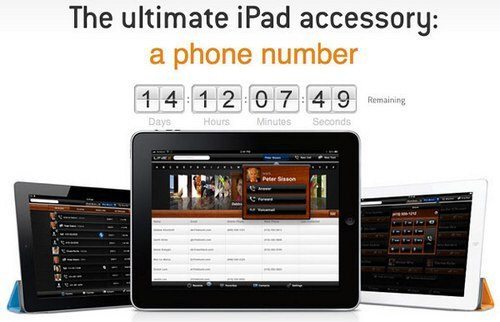