The glasses free 3D experience is available in the United Kingdom via the LG Optimus 3D, but the LG Optimus 3D comes with Android 2.2 Froyo aboard, but will get updated to Gingerbread in the not too distant future, but just when will that be? Well LG has now apparently given out some info on that matter.

According to an article over on The Inquirer, they popped down to Canary Wharf to check out the LG Optimus 3D launch pods so they could check out the Android smartphone and its glasses free 3D experience and the tech men came forth with the info.

The main piece of news concerns the Optimus 3D operating system, and that LG will deliver Android 2.3 Gingerbread to the smartphone sometime in October although the guys didn’t come up with an actual update day.

However apparently to play 2D games in 3D there is a requirement, and that requirement is that the app must be Open GL.

If you are curious as to why LG didn’t actually release the LG Optimus 3D already with Android 2.3 Gingerbread, apparently LG say they didn’t wish to delay pushing the Optimus 3D out to the public by spending time on getting Gingerbread ready for the release, thus LG placed priority in delivering the handset over and above having the latest Android operating system aboard on launch.

Price wise, here in the UK potential owners can pick up the LG Optimus 3D from Carphone Warehouse where they offer the Android smartphone as a free handset when taking up a contract costing Â£30 per month. If you need a full on in-dept video review of the LG Optimus 3D to help you make up your mind you can check one out by hitting up (here). 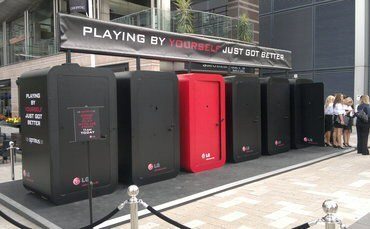