There are many over in the US of A that have been patiently awaiting the arrival of the much delayed Motorola Droid Bionic smartphone, with the Android smartphone currently expected to hit as of the 4th of August, and often people are on the lookout for any news concerning the device, so when a Droid Bionic landing page hits the net waves it draws some excitement; however apparently said Droid Bionic is counterfeit.

According to the guys over on Android Community have apparently taken quite an up close scrutiny at the supposed Motorola Droid Bionic landing page and have come to the conclusion that there are several points that lead to the assumption that the page has been actually photoshopped.

Apparently they notices a few misplaced pixels that caused them to delve further into the Droid Bionic landing page have discovered that the page has been created by someone with the ability to “copy squares of color and paste them every so lightly.”

The guys say that the first evidence shows with the Droid Bionic’s logo, whereas before the alignment of the logo doesn’t line up perfectly like previous devices such as the Samsung Droid Charge and HTC Droid Incredible 2, and the real designers wouldn’t make such a basic mistake.

Another sign is a misalignment of the Bionic logo at the bottom of the page, which basically means two different logos were used for the page. Another telltale sign is that the Motorola Droid X2 is completely missing from the device line up.

So basically all these little mistakes mean that this Motorola Droid Bionic landing page is a fake, now just why someone would want to go to the trouble of faking a landing page for the Droid Bionic I can’t really quite fathom as what do they get out of duping the people?

I could understand if they were to receive some recognition, but the only recognition if they are found out, it likely to be that of being branded a faker and duper, so why do it? Anyone have any ideas as to why people like to dupe others with fake images? 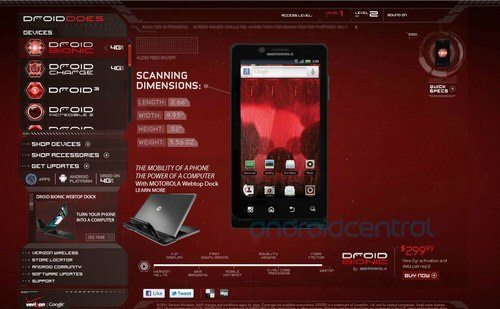