Okay, we all know that when word comes that there’s a new iPhone on the horizon, the iOS faithful go into a frenzy and we start seeing people camp out in order to become the first person in their area to get the next generation iPhone, however usually when this happens we do know when the device will hit the streets.

However it appears some iOS faithful geek has jumped the gun a tad and is already camping out so he can be one of the first to snag the iPhone 5, which seems somewhat premature to me anyway as there could still be one hell of a long wait until the iPhone 5 surfaces.

But all is not as it seems apparently as according to an article over on Metro, former bin man, 29-year old Rob Shoesmith, is camping outside Apple’s flagship store in London to get the iPhone 5 as soon as it arrives and has managed to snag 40,000 quid’s worth of free stuff as part of a publicity stunt while the guy camps out.

Apparently the biggest thing he’s been given thus far is a Chevy car worth Â£20,000, and other stuff includes a giant red fire bucket, free food, 800 quid’s worth of outdoor gear and other stuff, and Shoesmith, who now works for Medi Mobile as a marketing exec will use his blog to promote the companies that give him free stuff during his camp out outside the Covent Garden Apple Store.

Shoesmith says, “The postman doesn’t like me right now. Something’s coming through every day at the moment.”

The stunt will also enable Shoesmith to build contacts with the thousands of firms he has emailed for free stuff, and says, “People might look at this and say that I’m being greedy but I want to prove that it can be done in the most over-the-top way.”

Apparently Shoesmith does intend to donate any reusable good to charity once the stunt is complete however, so that’s something, but one does wonder if he will actually donate that 20 grand Chevy.

Still albeit being a stunt, it still seems quite a bit premature to be pitching your tent right now in the hopes that the iPhone 5 will actually launch in London the same time it launches in the US because as we all know Apple isn’t that predictable when it comes to releasing their new iOS gear. 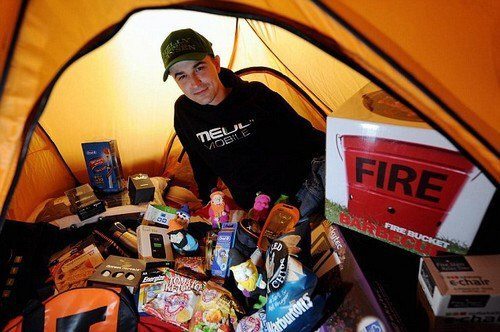