LG seems to be coming of age in the smartphone mobile space with releasing high-end handsets such as the LG Optimus 3D earlier in the year and LG is planning on bring several new smartphone to the mobile space in the second half of the year of the Android Gingerbread and Windows Phone variety, and those future handsets have now been revealed.

The guys over at Pocket Now have somehow managed to get their mitts on some images of LG’s upcoming smartphone lineup, however apparently they were not allowed to post the images so have made a few mockups, so here’s what you can expect from LG in the coming months.

First off is the LG Prada K2 smartphone that sports a 4.3-inch NOVA LCD along with an 8 megapixel rear facing camera and 1.3 megapixel front facing camera, an LG Prada inspired casing, 21mbps HSPA+, is 8.8mm thick and runs the Android 2.3 Gingerbread operating system, and is apparently expected to surface in time for the holiday season.

Then there’s the LG Univa, apparently the LG Optimus Two, and packs a 3.5-inch HVGA touch screen, 5 megapixel camera, 800 MHz processor, DNLA support, is said to be 11.9mm thick and also runs Android 2.3 Gingerbread and is expected in Q4.

Next is the LG Victor with a 3.8-inch OLED WVGA display, 5 megapixel rear camera and VGA front facing camera, 802.11b/g/n radios that apparently supports both WiFi and DNLA direct, 1GHz single core processor and against is Android Gingerbread and expected to hit this quarter.

Then there’s the LG Fantasy, a Windows Phone 7 Mango smartphone but there isn’t any detail on what specs the LG Fantasy will sport, but the word is this device is expected in the fourth quarter.

There is also an NFC version of the LG Gelato handset, which was outed as the LG Optimus Net, with a 3.2-inch HVGA touch screen, 3 megapixel camera, 800 MHz processor and of course Near Field Communication functionality, and is expected possibly this month.

There’s a couple of over smartphones as well although not much info on, the LG E2 that sounds like a pared down LG Optimus One, and the LG K, which apparently will be “one of the first phones with a true 720p display,” and they expect a 4.5-inch display that has a “pixel density that matches or exceeds that of the iPhone’s Retina Display”

And that’s your lot, we have posted a couple of those mockup images below, but if you want to check them all out you can do so by hitting up their website. 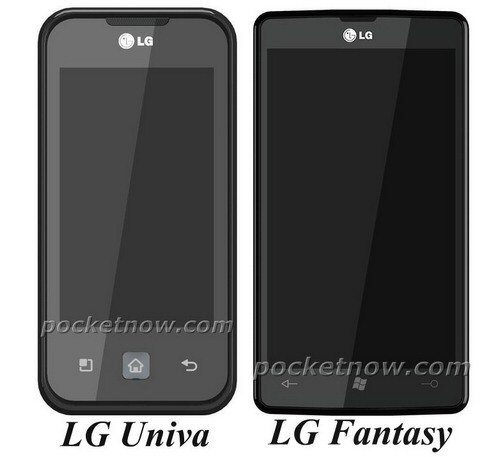